Supporting equality for all

“We hold these truths to be self-evident, that all men are created equal….” 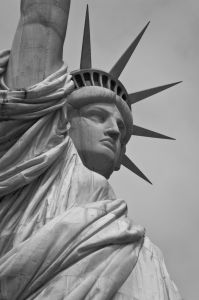 The world knows these words from the U.S. Declaration of Independence well. It’s a foundation of our country’s vision of a land where everyone has an equal opportunity to enjoy life, liberty and the pursuit of happiness.

In the years since those words were written, America’s leaders have amended our laws to make it clear that every citizen is entitled to the same rights, regardless of their gender, skin color or other characteristics. That work isn’t finished yet, though, because the LGBT community still faces discrimination in the workplace and in their personal lives.

Legislation like the “religious freedom” bill recently passed in Indiana is a giant step backward in the march for equality. Other “religious freedom” legislation already exists in some states, and is pending in others. Although I fully support laws that protect an individual’s right to practice his or her faith (or not to practice any faith) without government interference, I do not believe in laws that allow discrimination against anyone, for any reason.

So it does my heart good to see an outpouring of support for LGBT equality in the wake of the Indiana bill being signed into law. Across the country, people are standing up and being heard.

We are a non-partisan, nonjudgmental group looking to provide a grassroots network for people to support businesses that open their doors for everyone – Black, White, Gay, Straight, Christian, Atheist, Disabled . . . well, you get our drift. 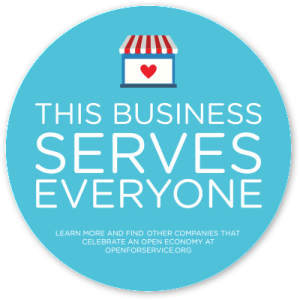 Open for Service’s mission is simple: to celebrate businesses that oppose discrimination of every type. For a $10 contribution, businesses can be added to the Open for Service roster and receive a window sticker to show their customers that they believe everyone is equal — and will serve everyone accordingly.

As a small-business owner, I’m proud to sign on to Open for Service. I may not have a shop window to display my sticker in, but I gladly join businesses across the country in saying I would never turn away a customer because of who they are, what they believe, or who they love. Open for Service also sends a positive message of unity and lets those who may fear discrimination know they are welcome.

I believe in equality, and I believe in the collective power of people to drive positive change. Together, we can make sure America remains a country that upholds the principle that all men and women are, indeed, created equal — and makes sure everyone is treated that way.

You might not think a show about Presidential assassins would inspire activism for social justice and the greater good, but Stephen Sondheim’s Assassins has done […]

Ever since I can remember, LGBTQ people have been part of my circle of friends, including those so close I consider them my chosen family. […]