I didn’t come to Washington, D.C., thinking I could change the world, like Mr. Smith did in the movie. But after a day at the White House, I feel like maybe I can do just that.

Being a political idealist isn’t new to me. I also firmly believe that one person can make a difference. If I didn’t, I wouldn’t be working so hard as a volunteer organizer for President Obama’s re-election campaign.

What inspired me about my White House visit, though, was the fact that the Obama Administration officials I met truly believe in the power of the people. These dedicated, talented men and women impressed on me over and over that the voices of American citizens truly matter to them. Our voices matter. In fact, they told us our voices and our participation energize them.

Being a content specialist and communicator — both professionally and as a volunteer for the Obama 2012 campaign — I’m active on Twitter. That’s how I came to be invited to the White House for what they call a White House Tweetup (known on Twitter as a #WHTweetup). Citizens like myself can apply for the chance to visit the White House for a special occasion, tweet about it and meet with Administration officials.

From the moment I learned I’d be attending the official arrival ceremony for UK Prime Minister David Cameron and his wife, Samantha, I’d been looking forward to this day. And it did not disappoint. Short of meeting the President and First Lady, I could not have had a more inspiring experience. 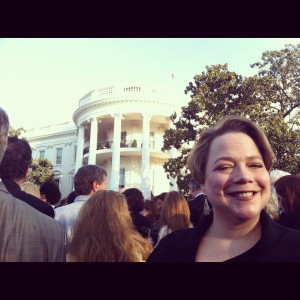 About 7,000 attendees, including our Tweetup group of 50 or so, assembled on the South Lawn for the ceremony. It would take pages to describe the rich pageantry and tradition of the ceremony, and how deeply it moved me. The British fife and drum corps and U.S. military band, the official flag ceremony, the 19-gun salute … my heart swelled so many times I thought it might burst. When they began playing “Hail to the Chief,” I was finally convinced I wasn’t dreaming. What a thrill to hear President Obama speak in person — a speech filled with respect and fondness for our friends in the UK, and a fair amount of ribbing about the time the British tried to burn down the White House many years ago. He was in rare form and I thought, for the millionth time, how much I admire our President.

After the ceremony, the Tweetup group spent two hours hearing from White House officials about the Obama Administration’s initiatives in economic and foreign policy, communications, digital strategy and engagement.

I learned a great deal from these brilliant people, coming away with invaluable information that makes me smarter and will help me in my efforts to educate others about the President’s accomplishments.

As interested as I was in the communications and digital strategies the officials discussed (which I’ll share in a future post), two things made the most powerful impression.

First was the presentation from Brian Deese, Deputy Director of the National Economic Council. I am not a numbers person, but he makes economic policy understandable. So I took advantage of the chance to ask him this: How can those of us who support the President best educate others about what the President has done to help our country’s economy?

Deese reminded us that President Obama has had to make many difficult, politically unpopular decisions about our economy, but he’s made every single one with the best interests of working people and the middle class at heart. Equally important, his decisions have created the foundation for sustained economic growth and stability, to help prevent the economic chaos that existed when he took office from happening again. Deese cited the rescue of the auto industry and financial industry reform. Another pillar of the President’s economic policy is the Affordable Care Act. As wages have stayed flat or gone down and healthcare costs have gone up, healthcare reform is essential to our economy and the financial well-being of all Americans.

We can be optimistic about the economy again, said Deese, an optimism tempered by the knowledge that there’s still work to be done. He said he wakes up every day with a sense of urgency about the work that lies ahead, as does everyone at the White House. We’ve come a long way and there’s no plan to slow down now.

The other presentation that made the biggest impression on me was given jointly by Macon Phillips, Director of Digital Strategy, and Jon Carson, Director of the Office of Public Engagement. They work very much in tandem, and the marriage of online communications and real-life engagement — both sharing information and listening to what’s being said by citizens — is a powerful strategy.

Carson engages with advocacy groups from around the country, from every sector. Through him, the White House connects with Americans working in their communities, whether those communities are local or nationwide, in an effort to improve the lives of their fellow citizens. From major organizations to start-ups, Carson collaborates with these groups to help them flourish. It’s just one of the ways the White House is engaging with citizens across the country, day after day, to everyone’s benefit.

Of course, communicating about these initiatives through digital strategies like Twitter, Facebook, websites and more is essential. It gets information out to people and provides a way for citizens to have their voices heard.

That brings me to the most important point of all. Carson made a statement that reinforced my faith in one person’s ability to make a difference. I’m paraphrasing, but he said the American people should never underestimate their ability to engage in advocacy and to influence policy in Washington.

It’s true — and it’s something President Obama and his Administration believe in wholeheartedly. Since taking office, the President and First Lady have consistently worked to make the White House the people’s house, and it shows. Events like the Tweetup are one example. The genuine interest of the officials at the Tweetup in hearing what we had to say is another. They were as eager to know what we thought of their initiatives as we were to learn about them.

After being at the White House, I’m more convinced than ever of the power of the people. United, we’re at our strongest. But every single one of us has the potential to change the world.

To see my live tweets from the ceremony and White House Tweetup on March 14, 2012, visit me on Twitter. You can also read a Storify recap of my day.

Special thanks to Roz Basherian, who inspired the title of this post.