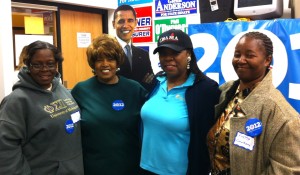 Posted on: November 9th, 2011 by Amy Lynn Smith No Comments

The power of the people inspired me today, more than usual.

It actually started yesterday, when the voice of reason prevailed in many elections across the country, with people triumphing over politics. Today, I had the honor of meeting Congresswoman and Democratic National Committee Chair Debbie Wasserman Schultz, who I admire greatly. And tonight, I had the privilege of speaking about President Obama’s accomplishments to date at a volunteer team meeting for Organizing for America (OFA), the President’s grassroots team.

The last 24 hours have had an energy about them, a feeling of forward momentum and optimism. When Debbie Wasserman Schultz walked in the OFA office where we were phonebanking, she brought even more energy with her. I say this with the deep respect her position warrants: She’s a spitfire. She’s smart, strong and articulate. She’s passionate about wanting to do what’s right for the country and its citizens, and she’s not shy about speaking her mind to get the job done.

The Congresswoman is a born leader, but she’s also very human. She made phone calls to constituents with the rest of us and didn’t hesitate to pitch in when furniture needed to be moved. I learned as much from that team spirit as I did from her brief remarks, which underscored that all of us can play a role in making our country better.

We, the people, have the power to make a difference.

I carried the Congresswoman’s energy with me all day and into the evening’s OFA neighborhood team meeting. This was the first of what we now think will be a series of educational sessions to inform our friends and neighbors about key issues and mobilize more volunteers.

Fellow team members spoke about the three branches of government and recent obstructionism by the GOP, and I concluded the presentations by talking about the President’s accomplishments to date. In my 10-minute time slot, I didn’t even smudge the surface.

I came armed with two pages of bullet points. And meeting the Congresswoman reinforced what ties all those bullet points together: Everything President Obama has done — and wants to do — is focused on doing what’s right for people. Creating jobs. Growing the economy. Making healthcare coverage more affordable and available. Improving education. The list goes on.

The President, the Congresswoman and many other elected officials want to do what’s right for the country and its people. So does every single person who was at the volunteer meeting tonight.

When we asked the newcomers what they thought of the meeting, some said they felt energized. Others appreciated the learning opportunity. One woman said she’d been disillusioned, but now felt hope for the country. And every person there was motivated to take action.