It’s not every day that you’re invited to the White House for the State of the Union. It’s also rare to have the chance to ask a question that’s answered directly by senior White House officials. 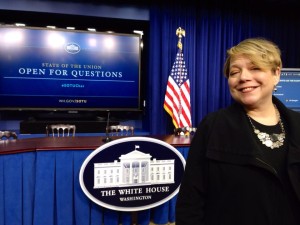 I had the great honor of doing both.

I was one of about 60 people chosen out of thousands of applicants to attend the #SOTUSocial. We watched the State of the Union from the White House and participated in a panel discussion with White House officials immediately after. I shared my experience on social media live from the event.

Needless to say, it was a thrill. You can read all about it in my post at Eclectablog. The post includes a video of the panel discussion, where a question I asked about how White House policies can help Detroit in its efforts to rebuild is answered around the 16-minute mark.

I also created a Storify digital scrapbook of some of my favorite moments.