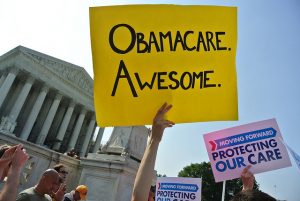 Posted on: November 25th, 2015 by Amy Lynn Smith No Comments

I have so much to give thanks for this year.

One of the things I’m thankful for is the chance to help people tell their stories — especially stories about how the Affordable Care Act (ACA), or Obamacare, is making a difference in their lives.

This Obamacare success story is one of my favorites. When I first told Marion’s story in June 2014, she had recently been diagnosed with cancer. She told me, “If it wasn’t for Obamacare, I’d be dead in 12 months.”

I reached out to her recently and was enormously happy to hear Marion is now cancer-free — and she says Obamacare saved her life. She’s been on a challenging journey, but has an optimistic outlook that’s truly inspiring.

You can read her story over at Eclectablog.

Like Marion and millions of others, I’m thankful for health insurance that’s more affordable.